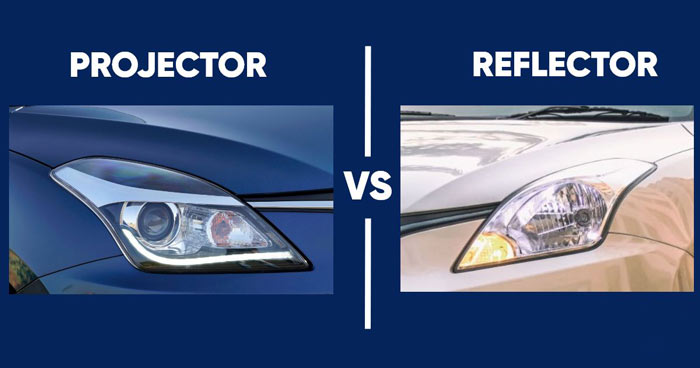 A headlight is a device that helps the driver of any car see the road ahead at night, as well as on cloudy or foggy days. Headlights use light to illuminate the path ahead and may also be used to help some drivers see around corners.

When you head out to buy a new set of car headlights, it’s important to make sure that you get the right type. When buying headlights, there are two types of light sources: projector and reflector.

The headlights will be the only light source that you will see when driving and, in most cases, it provides a crucial role in your safety. One has to make a decision about whether they want to go for reflector headlights or projector headlights.

So, pay attention as I go over the details. Before I continue any further, keep this simple rule in mind: HIDs are better for projector headlights and LEDs are better for reflector-type headlights. Trust me, this will make comparing both much easier.

What Are Projector Headlights?

Projectors are a newer type of headlight housing technology that is becoming increasingly popular, especially for higher-end luxury vehicles.  New projector housing is becoming more common among luxury cars thanks to their sleek and visually appealing design. 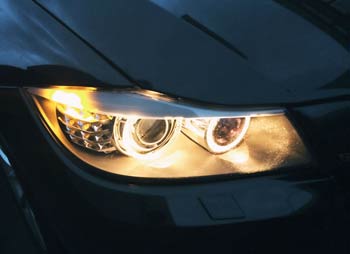 And that is their only similarity. Light from projectors is directed through a lens before hitting the front of the car. However, reflector headlights do not contain lenses.

Focusing the light is achieved using a lens known as a condenser lens. Using a lens will increase the brightness of the bulb while demonstrating less light waste. Reflector headlights give off light in all directions, but projector headlights project the light straight ahead.

What Are Reflector Headlights?

The advantages of reflectors are that they also provide superior low-light visibility, improved depth perception, and increased safety. However, their disadvantage is that they don't project as much light as the projector headlights do.

They use a reflecting material or mirror to reflect light from the car's headlights back towards the road. The primary function of a vehicle's headlights is to illuminate the road ahead. 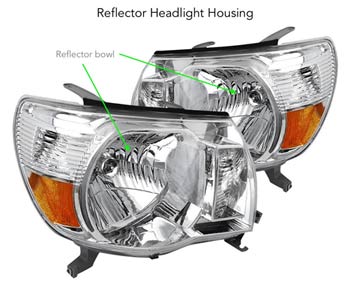 LEDs and HIDs: Which Is The Best For A Projector/Reflector?

For a projector and reflector, the LED or HID headlights to use can be a tricky issue. Let's take a closer look at the two technologies and decide which option would work best.

Reflector headlights can also be fitted with HIDs, but they will not be as bright as LEDs, and they are less easy to install than LEDs. We strongly recommend consideration of HID lights if you plan to upgrade your car's headlights to LEDs, but your car has projector headlights.

One thing to note about car headlights is that they should be well lit for safety purposes. So, it will be wise to choose an LED or HID based on the purpose of your projector/reflector for headlights - visibility or brightness.

LEDs and HIDs are the two types of light bulbs that are most commonly used in car headlights. However, there is a difference between them - both in terms of brightness and lifespan. While LEDs cost more than HIDs, they last longer and require less maintenance.

If you are looking for a bright, high-quality headlight, the best option is to upgrade your current halogen or incandescent lights with HID headlights. The cost of the upgrade will be worth it in the long run, as HID headlights will offer an increase in lighting output.

LEDs are brighter than HIDs for reflectors. However, the installation of upgrades is slightly more difficult. If your car's headlight has reflector-style lighting, it would be best to install LED headlights.

HID lights are good too - they're just not quite as bright and there might be delays in installation due to the difference in technical specifications.

Projector Vs Reflector Headlights: The Differences 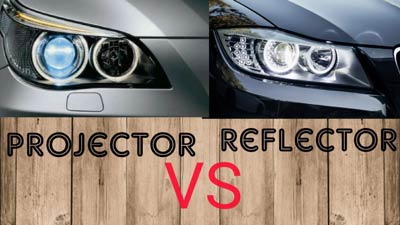 In this article, I’m going to be comparing projector headlights vs reflector headlights. I will look at their features and draw comparisons between the two different types of lights.

In most cases, car headlights are either a projector or a reflector. The main difference between these two is that a projector is brighter and has better range, but the reflector has less range and is dimmer. I’m just scratching the surface here.

Let’s take a deep dive and see the difference between projector and reflector headlights.

Projector headlights were created to address the need for a headlight that could produce a beam of light that was directed at a specific angle.

These headlights are paired with LED or HID technology and can project an intense beam of light that is directed at a certain angle.

They are popular among commuters as they offer greater visibility when driving at night or in foggy conditions. Reflectors are affordable and cheaper to make.

The main difference between regular and projector headlights is that they cast a wider beam, giving more visibility and safety at night and in foggy conditions.

Some people find them more difficult to see with than regular lights because they feel like their eyes are being tricked into thinking it's daytime when it shines at them straight.

Another difference between both types is that while projector headlights use a single beam, reflector headlights are more spread out. This means that it's easier for drivers using these cars to see other vehicles better at night time because they don’t blind them.

Reflector headlights use light-reflecting material to give cars a wider range of visibility and can be helpful in foggy or other low-light conditions.

They allow for better visibility and safety in low-light conditions, though most cars now have this feature as standard. Reflectors are most useful when driving on wet roads with limited visibility.

Projectors are known for their color-rich light output. Reflector headlights, on the other hand, are designed to be able to project a wider area of light coverage. Reflectors are also cheaper than projectors, but their light output isn’t as strong.

Projector lights have a lens that focuses the light onto a single point to make it more concentrated. Reflector lights, on the other hand, radiate their light in all directions at once because there is no lens.

Let’s take a look at the pros and cons of each to decide whether projector or reflector headlights are for you. 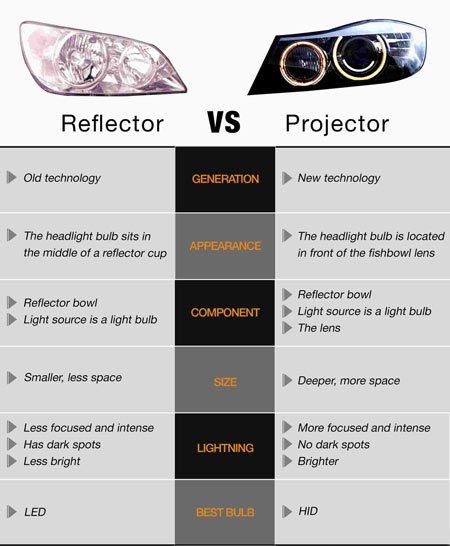 Projector Vs. Reflector: Which Is The Best For My Car?

Projectors are the most popular type because they make it easier to see at night without blinding other drivers. However, reflectors are best for minimizing glare and providing better visibility in rain or snow.

Headlights are one of the most important features of a car. They help drivers see and navigate their surroundings, and they also offer safety.

For those who want to choose between the projector and the reflector options and want to know which one is better for their car, this article should provide some of the most effective factors to consider before making your decision.

Whichever option you choose for your car, it should be chosen based on what you need as well as if it’s cost-effective for the particular needs of your car. And that concludes this article on reflector vs projector headlights.